Azealia Banks has praised UK drill in slightly backhanded compliment fashion, calling it “the first listenable let alone enjoyable hiphop music to come out of the country, EVER”.

She added: “This the first time American culture is looking to the UK to lead the mainstream. That’s a big deal. Bravo boys.”

Read this next: The sound of UK drill will turn a rave into a mosh pit in seconds

Alongside her praise, she condemned grime, saying “Grime sucks and I suggest you all just bury it and pretend it never happened.” 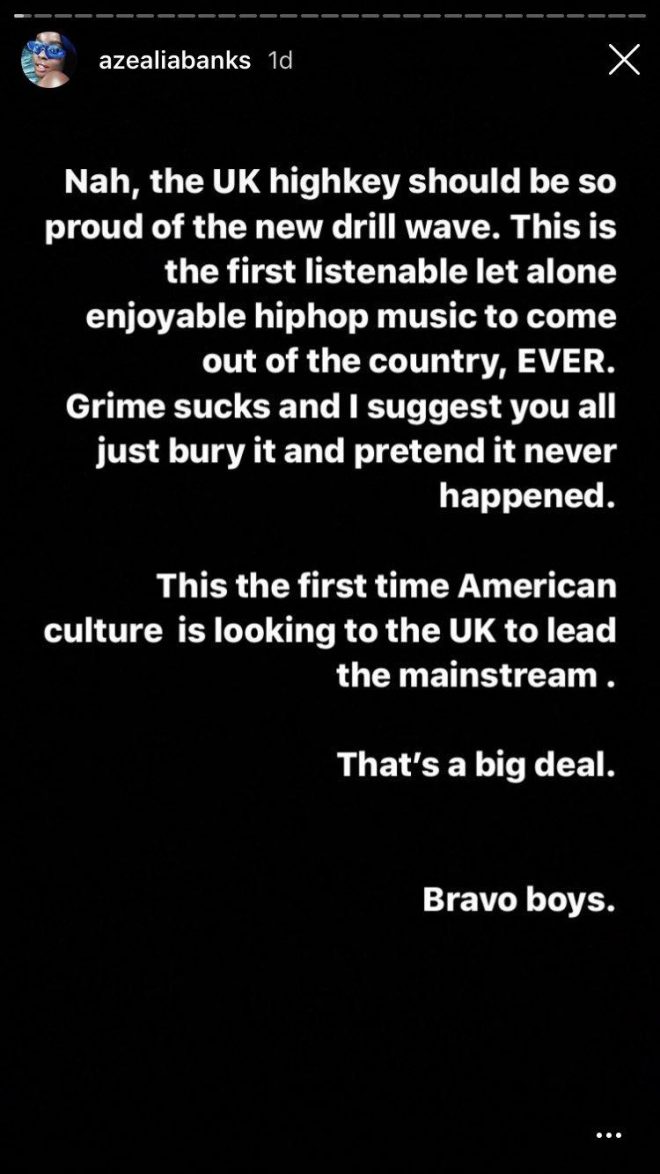 Drill music first originated in the South Side of Chicago near the beginning of last decade, before spreading to London, where it evolved to merge with the ticking percussion of grime and more menacing beats and flows.

The UK drill sound has now taken off internationally, with artists such as Drake, Pop Smoke and now Azealia Banks among the North American artists working with the style.

Azealia Banks helped popularise the trend of rappers spitting over dance music-esque beats with her breakout single '212', which we included in our best tracks of last decade round-up. She later worked with a number of UK electronic producers on her debut album 'Broke with Expensive Taste', including Pearson Sound, MJ Cole, Boddika and Lone.

Alongside her praise of drill, Azealia Banks has released a new Spanish language drill tune titled ‘Nirvana’ under new pseudonym La Arcacely, flexing hard-hitting bars on an AS IF KID and Onyx production. She added that her name would be “АЗИЛЬКА” in Russia and all Slavic territories, and that she still needs “a dope name for China, Korea, and Japan”.

You here for “La Aracely”?

Listen to 'Nirvana' below.