Rock band Queen is seeking to block Donald Trump from using “We Will Rock You” in his campaign ad.

A video shared by the president on Twitter featured the song set to a montage from his rallies. The 1977 hit plays for the full two-minutes. Reps for the band have stated they do not agree to the use of the song. The band’s music publishers eventually had the clip removed.

A representative also confirmed the band “has already entered into a process to call for non-use of Queen song copyrights by the Trump campaign.”

That’s not the first time Donald Trump has faced opposition from artists ⁠— even this week.

The president held a rally last night in Minneapolis, where he played Prince’s “Purple Rain.” The Prince Estate soon learned of the usage and shared a letter they sent over a year ago. The letter shared Trump’s campaign agreeing not to use Prince’s music going forward. 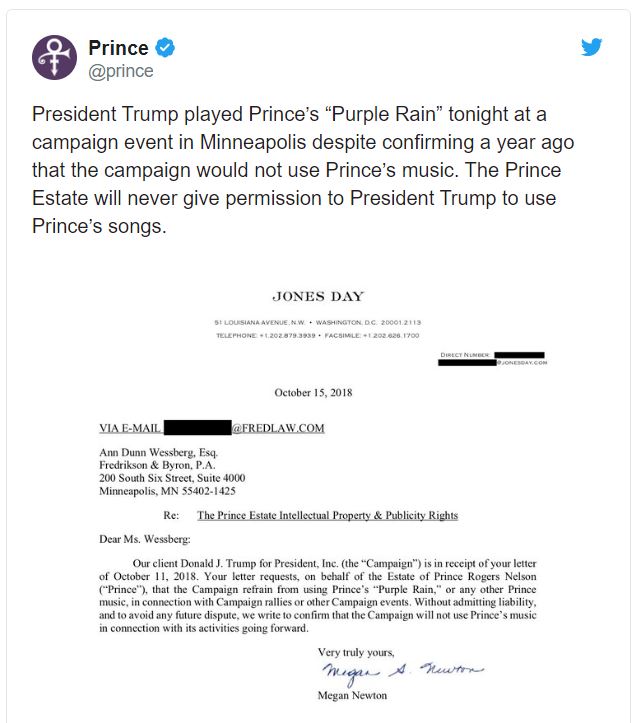 Trump has been critical of artists who seek to prevent him from playing their music. At last night’s rally in Minnesota, Trump criticized Beyoncé, Jay-Z, and even Bruce Springsteen.

, , , and others have all butted heads with him. It’s a problem for artists ⁠— generally, as long as candidates pay for the rights, they can use whatever music they like.

Prince’s Estate may have a different leg to stand on legally, however. The secured written agreement says “going forward” the campaign will not use Prince’s music. Aerosmith took it so far as to issue a .

This isn’t the first time Queen has opposed Trump using their music, either. Back in July 2016, the band “We Are The Champions” at the RNC. Brian May said he would not have granted permission, even if Trump asked.

Vicky Cornell's Lawsuit Against Soundgarden Drags On
The Vicky Cornell-Soundgarden lawsuit is raging on, and all involved parties have agreed to delay…