The Rolling Loud Festival is recovering from an active shooter scare over the weekend.

Thankfully, there wasn’t an active shooter at the Miami mega-event.  But at some point during the festivities Friday night, reports of a gun-wielding assailant triggered panic among attendees.

Anyone who’s witnessed the large crowds at Rolling Loud — or any large music festival — can quickly guess the problem that developed.

Many booked for the exits or safe shelter, prompting a stampede and numerous injuries.  At this stage, the total damage seems limited to a few injured concertgoers, though full details are still emerging.

As an aside, reports of a high-speed drive-by shooting involving Rolling Loud performer Young Thug have also emerged.  But that violence reportedly occurred on the nearby I-95 highway earlier on Friday.

Here’s a full statement from Rolling Loud’s cofounder, Tariq Cherif, on the situation.

“Shortly after 11 p.m. on Friday night, there was a disturbance that led a large group of fans to believe there was an active shooter within the festival grounds.  The commotion resulted in these fans running out of the venue, some of whom were injured and/or scared in the process.  Security and public authorities immediately sprung into action, established it was a false alarm and there was not an active shooter in the festival, and diffused the situation.

“Safety is #1 at Rolling Loud. We have hundreds of police officers and security guards hired to protect our fans. While we are upset this situation occurred, we are proud of the swift reaction of law enforcement to verify the area was secure.

“Thank you for understanding,” he added. “Let’s all come together today with positivity and have a great day.”

The statement was posted early on Saturday, May 11th on the festival’s Instagram account, hours after the Friday night incident had died down. 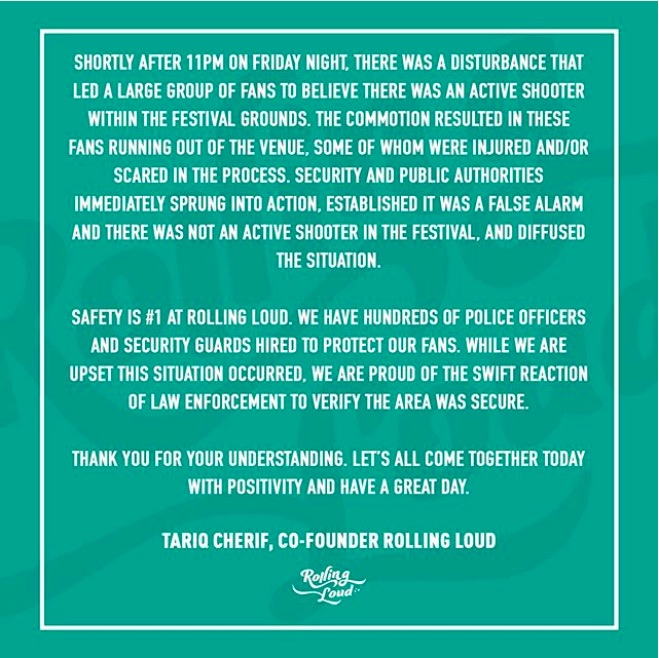 Amazon Unveils Song ID, Telling Users What Song is Playing, But Only for US Echo Devices
Amazon has made a brand-new revolutionary function – Song ID – accessible just for Prime…