Earlier today President Trump tweeted a doctored photo of his rival Joe Biden. The tweet included a meme from a Nickelback video with the phrase, “LOOK AT THIS PHOTOGRAPH.”

The tweet contained a video containing a doctored photo relevant to the Ukraine controversy. The video took aim at Joe Biden, opening with a clip saying he never discussed business dealings with his son. The video includes a clip from Nickelback’s single, “Photograph.”

The the edit shared by Trump, lead singer Chad Kroeger’s photo is replaced by one of the Bidens in 2015. It shows the pair on a golf course with Devon Archer ⁠— an ex-Ukraine gas executive. Within 12 hours of being posted, the meme was removed from Twitter. 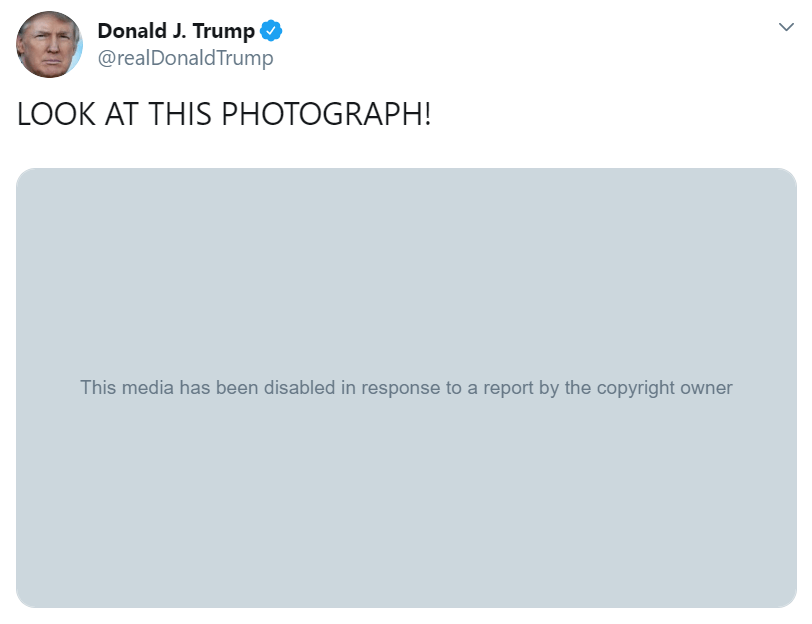 Trump has had at least seven filed against his Twitter account this year. All of those have resulted in the removal of content. What’s worse is the same video was eventually uploaded to the official White House YouTube channel. Warner Music was quick with another DMCA takedown notice to get that video offline, too.

Nirvana bassist Krist Novoselic has stepped up to defend the Canadian rockers from conservative news outlets. After one conservative media host made the assertion that he thinks “Nickelback is like socialism” the rocker responded on Twitter.

“Who is this jerk? Nickelback is a is power pop rock band & I love them!!!! They are Canadian BTW. The USA can work well because of the uneasy marriage between socialism and capitalism here. There is push and pull—so be weary of those on the fringe advocating one way or another.”

It’s strange to see a meme from an internet video from 2005 relevant again. Aerosmith has been fighting for years now.